Robots that assist people in regaining their mobility, will evolve from exoskeletons towards flexible suits, controlled in a smart way. That is what Prof Herman van der Kooij of the University of Twente foresees. He is leading the new ‘Wearable Robotics Lab’ of the UT and Roessingh Research and Development. This is a safe environment for testing new robots.

A wearable robot helps people in regaining and strengthening their mobility. It replaces or improves a body function that is damaged, or acts as a training instrument that, in the end, enables patients to walk fully by themselves again. In this way, they can also lighten the work of therapists. After a stroke or paraplegia, robots can help patients stand up and walk again. But wearable robots can also help people that structurally overload their body doing their work– a major cause for sickness leave. Another application is ‘tele presence’: the movements of the person wearing the robot are transferred to a distant robotic arm, for example.

The current robots, for this purpose, are often exoskeletons, with many rigid parts, electric engines and batteries. The question is why we need these bulky and heavy external skeletons while the problem is actually not in the skeleton of the patient but in nerves and muscles. Herman van der Kooij, who raises this question, will be leading the Wearable Robotics Lab. According to the Professor of Biomechatronics, the next generation of robots will have lightweight parts, can be put on like a suit and doesn’t require additional support from crutches. Van der Kooij’s group is currently working on a new type of knee orthosis, to be followed by the ankle and hip, resulting in a full suit in the end. 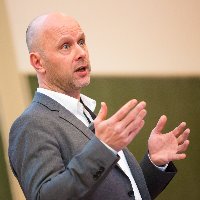 “If the problem is not in the skeleton, but in the nerves and muscles, do we really need an exoskeleton?”
Prof Herman van der Kooij

These new types of suits will have light actuators functioning in a different way from the ones in conventional robots. Another innovative aspect is real-time control using personalized muscle models and EMG measurements. Testing these new robots with patients and test subjects, requires a safe environment in which the risk of falling is minimized. For this reason, it is a joint lab of the UT and the rehabilitation specialists of Roessingh Research and Development in Enschede. Apart from that, the new lab is part of the I-Botics initiative of UT and TNO.

Putting these new robots to the ultimate test, is also done in an international competition called Cybathlon, organized by ETH in Zürich every four years, with side-events in many other countries. People with disabilities can join the competition, with optimal support of robots. The University of Twente, RRD and TU Delft have formed a cybathlon team as well. The new lab will be a good training facility for the team, for which new ‘test pilots’ are welcome.